What you can learn in this article -

Incoming calls ring for five agents in a team at the same time. Agents that have the least number of events scheduled and claimed leads would receive a call more often than their counterparts.

When a call from a lead is missed by the agent (or vice versa), a screen with the message "Call did not connect? Follow up scheduled  for <20 minutes from now> today, and suggested next steps would appear:

Note - The app screen would not disappear until one of these actions is performed.

When a call with a lead was successful, a screen (i.e. Call Modal) suggesting these steps would appear:

F2F: Schedule a face to face with the lead. This will move the lead to the 'Interested' bucket, and the event will show on the in-app calendar.

SV: Schedule a site visit with the lead. This will move the lead to the 'Interested' bucket, and the event will show on the in-app calendar.

Confirm FU: This option would activate after you schedule a follow-up from the available options or Custom.

Note - The app screen would not disappear until one of these actions is performed.

Besides the options already discussed above, there are other possible ways to schedule the Followup events with leads. 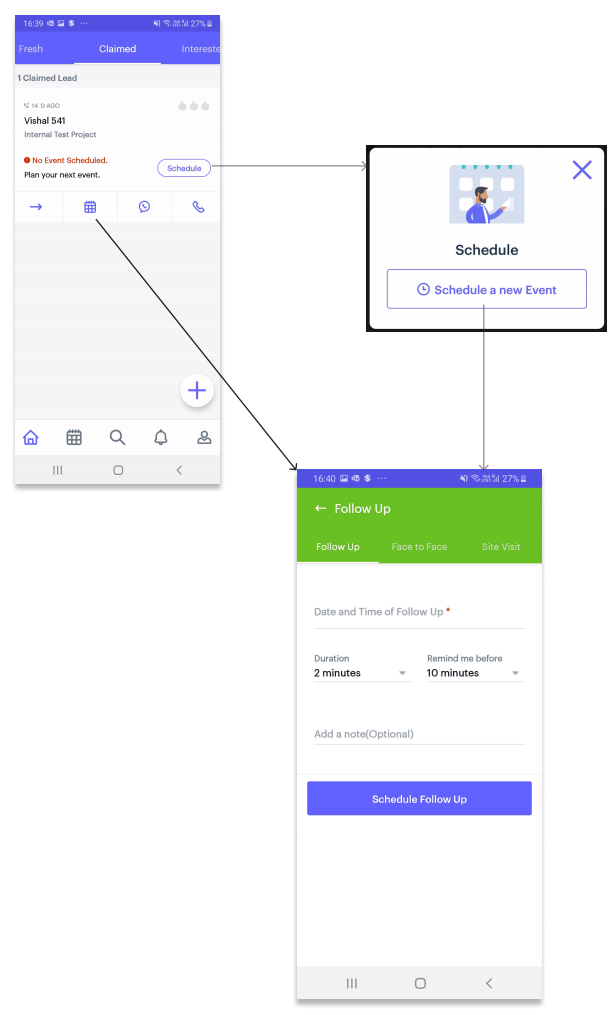 Schedule calls with leads in other buckets -

The calendar icon available for each lead in other buckets takes you to the same 'Follow-up' screen as shown above.

Call recording - Schedule calls with lead in other buckets -

The app's ability to record calls depends on the operating system's and the phone's ability to support this feature.

When available though, you can find a recorded call in the lead information page (tap on the name of the lead in any bucket to get here):